Global warming is a challenge for all of us to work together to overcome. Besides direct CO2 emissions, the hydrofluorocarbons used in cooling systems like air-conditioners, refrigerators, and ULT freezers push the warming due to their chemical structure. They have a multiple of the CO2 effect. Therefore, the kind of cooling liquid is put more and more into focus.

Hydrofluorocarbons
Some years ago, the ozone depleting CFC-based cooling liquids (fully halogenated paraffin hydrocarbons) were phased out (based on the Montreal Protocol). The cooling was and partly is performed by using alternative compounds as hydrofluorocarbons (HFCs).
Despite being better for the environment (ozone), these classic cooling liquid HFCs like R508b and R404a still have a high Global Warming Potential (GWP). For example, R404a has a GWP of 3922. This means e.g. 100 g of this substances has the same GWP as 392 kg of CO2-aequivalent.

Each greenhouse gas has a global warming potential (GWP) value. This value reflects the climate impact of a kilogram of emissions compared to the same mass of carbon dioxide (CO2). The GWP value is calculated and published by the Intergovernmental Panel on Climate Change (IPCC). The GWP is calculated using a set time horizon. The GWP values are updated periodically based on scientific research.

Hydrocarbons
Hydrocarbon (HC) are also known as green or natural gases. The two major representatives are propane and ethane (known as R290 and R170). The GWP value of HC cooling liquids is roughly on the same level as CO2.
R290 is a commonly used cooling liquid in large commercial cooling systems. Due to their superior performance, the amount of green cooling liquids used is significantly lower as that of a similar system with classic cooling by HFCs. Due to these advantages, R290 and R170 are both on the SNAP list [1] for usage in very low temperature instruments.

Hydrocarbons in the California, USA
The California Global Warming Solutions Act of 2006 (AB32) established an Air Resources Board to determine and implement a statewide greenhouse gas emissions level of 431 million tons of carbon dioxide equivalent to be achieved by 2020. This process also includes a drastic reduction of HFC cooling liquids.


Hydrocarbons in Europe
In April 2014, the European Union announced a ban of all non-hydrocarbon-liquids (EU_517/2014) by 2020 for new cooling systems, also known as F-gas-regulation. This is performed by a step-wise reduction of the annual amount of newly produced or imported non-hydrocarbon-liquids in Europe. Producers as well as importing bodies of HFCs received reference quantity values based on their averaged annual quantities brought to market based on 2009 to 2012 (Article 16). These allocated quotas are reduced annually from 2015 (100 % reference value) on. The major reduction of HFCs down to 50 % will be achieved until 2020 by adapting newly produced cooling instruments to HCs. From 2020 to 2030, the cut-down of HFCs will be slower as new production of cooling instruments will be limited to HCs and the reduction is driven by phasing-out older instruments and therefore less servicing of these. 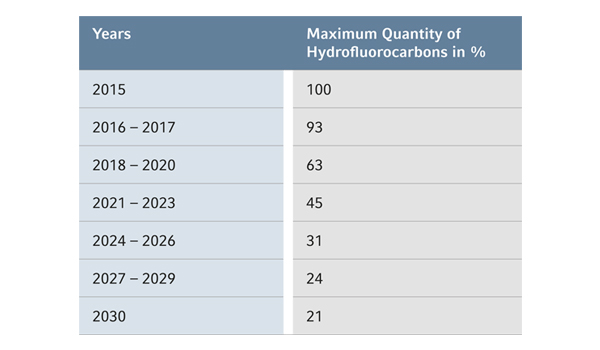 The ban of HFCs in Europe includes all cooling devices except instruments for temperatures below -50 °C (Article 13/3). Based on this exception, ULT freezers of -86 °C can continue to be produced with HFCs and can continue to run and be serviced. However, in the interest of curbing the effects of global warming, it makes sense to replace the HFC cooling liquids for new ULTs with the new ecologically-friendly green coolants.