Fluorescence – a Meaningful Addition to Absorbance?

Quantification of nucleic acids and proteins is routinely performed using UV-Vis spectrophotometry; however, on occasion, detection via fluorescence may prove to be more favorable. In this case, molecules are not detected through absorbance, but they are detected in an indirect fashion – via the signal of a fluorescent dye. Not only does fluorescence offer a highly sensitive detection method, but it allows selective measurement of individual analytes.

Case 1: How do I proceed with low-concentration sample solutions?

UV-Vis spectrophotometry is not very sensitive – in order to obtain accurate and precise data, sample concentrations should therefore not be allowed to fall below a certain concentration threshold. For dsDNA, this lower limit is approximately 1 µg/mL. Even if the lower limit of detection of the photometer has not been reached, the impact of measurement inaccuracy in this range is considerable, and resulting values may be prone to substantial variation. Fluorometric analysis, being 1000-fold more sensitive than the absorbance method, is capable of quantifying sample solutions of extremely low concentrations very accurately.

Case 2: How can I perform accurate quantification despite sample contamination?

In addition to quantification of nucleic acids at 260 nm, UV-Vis spectrophotometry offers the option of determining sample purity by employing additional wavelengths (230 nm, 280 nm, 320 nm), or a wavelength scan, respectively. Data analysis will allow conclusions regarding the presence of substances such as salt, proteins or solid particles. If, on the other hand, the absorbance spectra are too similar, as is the case for the different nucleic acids, absorbance alone will not be able to distinguish between, for example, RNA und DNA. In this case, fluorescence measurements will allow the specific quantification of analytes, without interference from other molecules.

On which principle is this method based?

Fluorescence measurements take advantage of the phenomenon that certain molecules are capable of emitting energy in the form of light. For the detection of biomolecules such as nucleic acids and proteins, a fluorescent dye is selected that will bind to the analyte with the highest possible specificity. The binding of the reagent PicoGreen® to dsDNA is a classic example. Following excitation of the complex using light of a specific wavelength (approximately 480 nm for PicoGreen), the fluorophore will emit light of lower energy, i.e. of a longer wavelength (approximately 520 nm for PicoGreen) (figure 1). The light is measured as relative fluorescence (RFU), where the intensity of the fluorescence is proportional to the concentration of the sample.

Figure 1:
A) Principle of fluorescence measurements of nucleic acids (left)
B) The light that is utilized to excite the fluorophore (EX) has a shorter wavelength than the emitted light (EM) (right)

Which materials are required for this method?

Quantification of nucleic acids and proteins benefits from the selection of fluorescent dyes that bind to their respective target molecule with high specificity. In addition, at least one standard of known concentration must be available. Excitation of the fluorophore and measurement of the fluorescence intensity of the emitted light require either a stand-alone fluorometer or a fluorescence module that is integrated within another instrument. Equipment and fluorescent dye must be compatible so that the light source inside the instrument provides the required excitation wavelength(s) and the detector measures the light emitted. Depending on the type of instrument, the reagent solutions are located either in thin-walled reaction vessels or in cuvettes. Compatibility with the specific application with respect to fit, transparency, auto-fluorescence and volume must be taken into consideration.

How is the method carried out?

Figure 2 shows the sequence of a fluorometric measurement. Preparation of the blank, the standards and the sample is initiated by the addition of the fluorescent dye, followed by a short incubation period. First, one or more standards of known concentrations are measured in order to generate the standard curve. Determination of sample concentration subsequently takes place in a second step, where the measured fluorescence intensities of the samples are evaluated in relation to the standard curve. 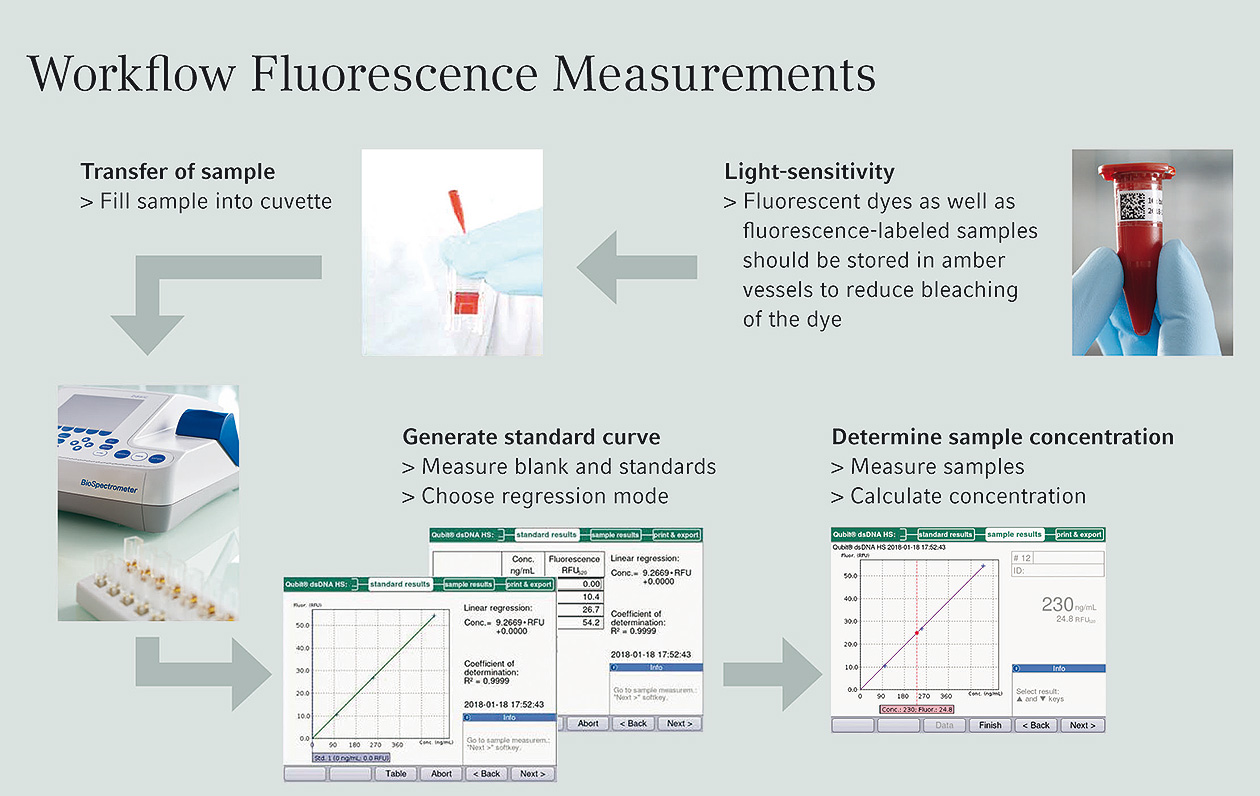 Even if fluorometry offers advantages in certain cases, classic UV-Vis spectrophotometry continues to be the standard method when it comes to quantification of nucleic acids and proteins. Spectrophotometry allows verification of sample purity, and highly concentrated solutions can be analyzed directly. Depending on the quality of the sample, as well as the requirements of downstream applications, it may be advisable to combine both techniques.