Within molecular and biochemical applications, as well as in medical diagnostics, determination of the concentrations of substances in solution is a crucial analysis step. Frequently, photometric methods are employed for this purpose, as these can be conducted easily and quickly, and because they often represent the most cost-effective option.

In general, (spectro)-photometric methods are based on the principle that molecules in solution absorb light, and that the thus weakened light is measured with the help of a detector. As implied in the name, UV/Vis spectrophotometers utilize visible and ultraviolet light in the wavelength range between approximately 200 and 900 nm.

In order to determine the concentration of an analyte, most often the wavelength is utilized at which the molecule displays the highest absorbance (peak wavelength). In the case of nucleic acids and proteins, for example, this would be 260 nm and 280 nm, respectively. The laws of physics described by the Lambert-Beer law form the basis for the calculation of the concentration of a substance from photometric measurements.  This occurs according to the steps of the formulae listed below:

These three statements are described in more detail below. 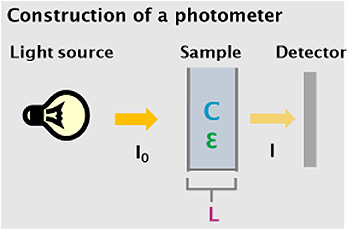 Figure 1: Simplified assembly of a photometer depicting the sample and parameters which are relevant to the law of Lambert-Beer

Basically, a photometer consists of a light source, a position which holds the sample, and a detector (figure 1). The detector measures the intensity of the light that travels through the sample. Naturally, a number of other components are present; specifically, optical elements which refract the light and separate it into individual wavelengths as well as elements which reflect or transmit the light.

Modern photometers automatically convert the transmission of a sample into absorbance, which is defined as the negative decadic logarithm of transmission. The question arises why transmission is not directly used for the calculation of sample concentration. Figure 2 clarifies the connection between transmission and absorbance. If several samples, which each allow 50 % of the light which enters the sample to traverse, are connected in series, the exponentially declining transmission curve, depicted below, will result. If the values are instead expressed in a logarithmic fashion, a linear dependency will result. In this way, absorbance is proportional to concentration (as well as path length), which simplifies calculations considerably.

Figure 2: The connection between transmission and absorbance of light:

a) Connecting samples in series, each of which allow transmission of 50 % of the light which enters the sample. The percentage pertains to the initial light intensity.

In order to derive the concentration of a sample from its absorbance, additional information is required. The Lambert-Beer law, which forms the physical basis for photometric applications, describes that the absorption of light by a sample is directly proportional to its concentration and its path length. Altogether, three parameters contribute to the absorbance value of a sample: first, the concentration (C) of the molecule; second, the path length (L) of the sample, which generally equals the path length of the cuvette. Then there is the extinction coefficient (Ɛ). The extinction coefficient is a physical constant unique to the molecule; it describes its property of absorbing light at a specific wavelength. This material-specific constant is known for a number of substances, including nucleic acids and various proteins, and the values have been published in the pertinent literature. In these cases, concentration can be determined instantly. If the value is not known, however, it is possible to enlist the help of a calibration curve. In order to generate a calibration curve, standards are required, i.e. solutions which contain known concentrations of the substances to be analyzed. These are measured in the photometer prior to the actual sample. The concentration of the analyte is then calculated using the standard curve.

Further to quantification, absorbance measurements may also reveal qualitative information about the sample: for example, the purity of nucleic acids and proteins may be determined by subjecting the sample to measurements at additional wavelengths, whereas information on enzyme activity is generally obtained through repeated measurements over time.