The Blank in Photometry

Measuring the blank – and how to get it right

Determining blank, or zero, values is an important step in all photometric measurements. It serves the calibration of the photometer, which is thus set to “zero”. The blank value should encompass all those components which are included in the measurement of the sample, with the sole exception of the substance to be analyzed. Blank measurements are carried out in the same instrument, under the same experimental conditions, as the actual sample measurement. This approach will minimize any possible influence that the instrument, as well as the environment, may exert on the determination of the absorbance value of the sample. In addition, auto-absorbance of both the cuvette and the medium, in which the analyte is dissolved, is automatically subtracted from the result. While cuvettes are specially designed to be as transparent as possible for the light of photometric wavelengths, every material is subject to auto-absorbance that could potentially distort the result. The same is true for the solvent used.

The following must be considered for materials as well as for the experimental approach: 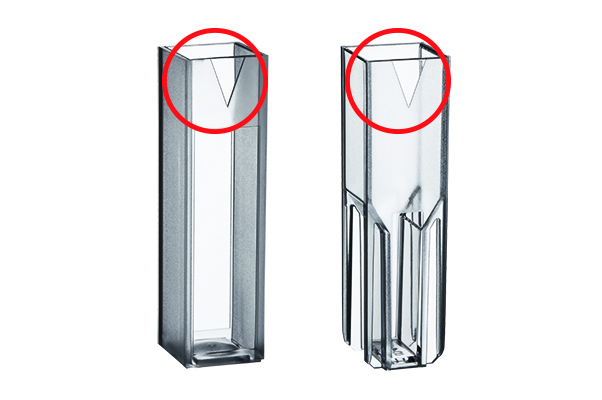 Medium/reagents
The blank should comprise the solvent in which the analyte is solubilized and, if applicable, all other reagents that are added to the sample prior to measurement. If the medium itself shows high absorbance within the selected range of wavelengths, the photometric measurement range will be compromised. If in doubt, the absorbance value of the respective medium, including all applicable reagents, may be determined via photometric means using demineralized water as the blank value.

If no blank measurement is performed, or if the “wrong” blank medium is selected, the measured absorbance value of the sample may change. This phenomenon is illustrated in figure 2 by means of DNA absorbance spectra. Figure 2A shows a representative absorbance spectrum of pure DNA. In this case, the same Tris buffer which had been used to solubilize the DNA was employed as the blank solution. In contrast, the very different spectrum that was obtained when water was used as the blank solution is depicted in figure 2B. Marked differences were observed between the calculated purity quotients of A and B, respectively, which, in turn, are suggestive of sample contamination in the case of B. In addition, mistakes made during the preparation of the blank may lead to erroneous calculations of sample concentrations.

Preparation:
The importance of careful preparation and performance of blank measurements should not be underestimated; errors which ensue during blank measurements may lead to incorrect measurements. Similar to the sample, the blank is subject to the minimum volume which is dictated by the choice of cuvette. Furthermore, the introduction of air bubbles into the cuvette (light path) must be avoided during the pipetting process, and the blank solution must be pure, i.e., it must be free from particulates and other contaminants. Negative absorbance values obtained for the sample, for example, may reveal problems with the blank solution or its measurement.

Measurement:
One blank solution can typically be used for multiple consecutive sample measurements. If, however, a considerable period of time is expected to elapse between individual measurements or if large numbers of samples are to be measured – for example, more than ten samples – a fresh blank measurement may be advisable. If measurement parameters change, a new blank measurement must be carried out in any case. Examples include differences in temperature or the type of cuvette used, as well as cases where the path length, the sample solution or the wavelengths are changed.

Analysis:
The software of modern (spectro)photometers automatically offsets the "measured value" of the blank against the absorbance values of the sample. In the case of older instruments, it may be necessary to manually subtract the blank value from the measured value of the sample.