Which Reagents Do I Need to Replicate DNA in the Laboratory?

During the proliferation of cells by cell division, the DNA is also amplified, so that the genetic material can be distributed to the resulting daughter cells. PCR, which takes place in reaction vessels, follows the same principle. However, this technique does not amplify the entire DNA, but only a defined region. On the other hand, it allows such a considerable multiplication of this sequence that the PCR is also called a copying machine for DNA.

Besides vessels in which the PCR reaction takes place and the thermocycler that carries out the temperature steps required for the reaction, various reagents are required:

The target sequence to be amplified must be present as template DNA. The template fragment is defined and limited by two short single-stranded DNA sequences, the oligonucleotide primers. After the denaturation step, in which the DNA strand is separated, the primers bind to the single-stranded template DNA and serve as starting points for the DNA amplification. The sequence and length of the primers determine the specificity of the reaction.

Four nucleotides (dATP, dCTP, dGTP, dTTP) function in the reaction mixture as building blocks for the production of complementary DNA strands. The tool that assembles the nucleotides and completes the single-stranded DNA strands into new double strands is an enzyme called DNA polymerase. For PCR, heat-stable polymerases are used since they do not denature at high temperatures. Usually Taq polymerase, which originates from the thermophilic bacterium Thermus aquaticus is used. To ensure that the enzyme works optimally, it is necessary to create a suitable environment. This is achieved by an appropriate buffer with a specific pH value and a defined ion composition. The polymerase requires divalent cations as cofactors, which are often added to the reaction in the form of MgCl2. Since the number of ions has a large influence on the performance of the reaction and optimal ion values depend on different parameters, a separate optimization of the best ion concentration is often necessary.

Water is used to fill up the reaction so that all reaction components have the appropriate concentration. High-purity water should be used, often referred to as "PCR grade" or "Molecular Biology grade". It is important that the water is nuclease- and protease-free, so that neither nucleic acids nor proteins are degraded. Furthermore, no contaminating nucleic acids or substances that can inhibit the reaction may be contained.

Figure 1 shows which amounts or concentrations of the respective ingredients are used for a standard PCR. 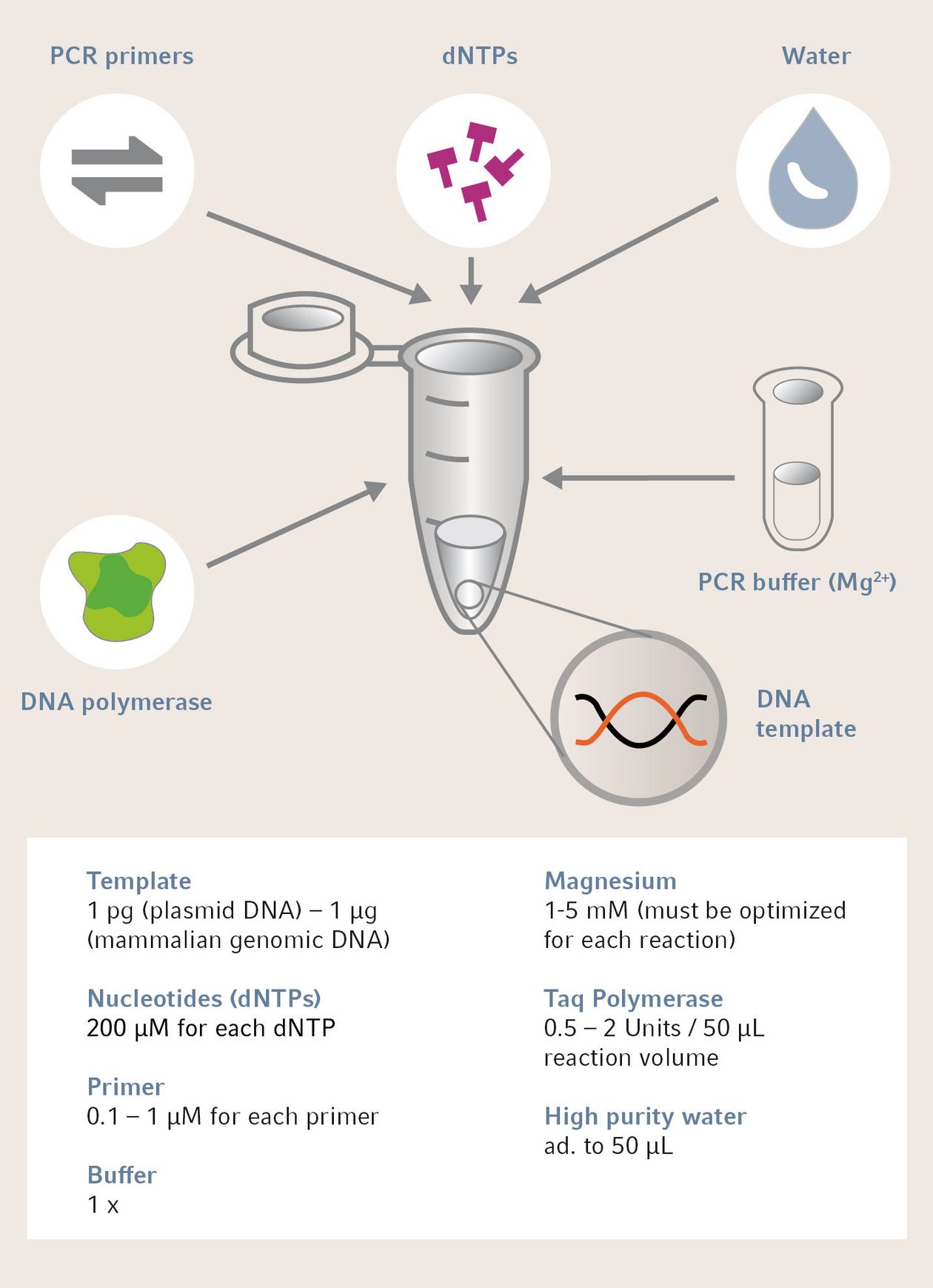 Example for a common PCR mixture
Back to list