This article appeared first in “Inside Cell Culture”, the monthly newsletter for cell culture professionals

In this article in a series of cell culture articles, we look at the basics of stem cell research.

Stem cells are the precursors to all cells in our bodies. In recent decades, stem cells have revolutionized our understanding of tissue and organ development – and are now making their way into the clinic, aiding treatments for a range of degenerative conditions. Here, you can find out more about the benefits and challenges of working with stem cells – as well as reasons for scaling up your cell culture.

"Stem cell" has become a term frequently used by scientists, doctors and the news media – but not always correctly or consistently. So, what exactly are stem cells? 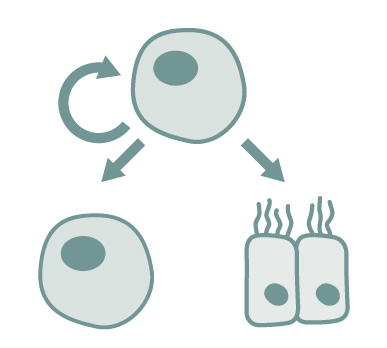 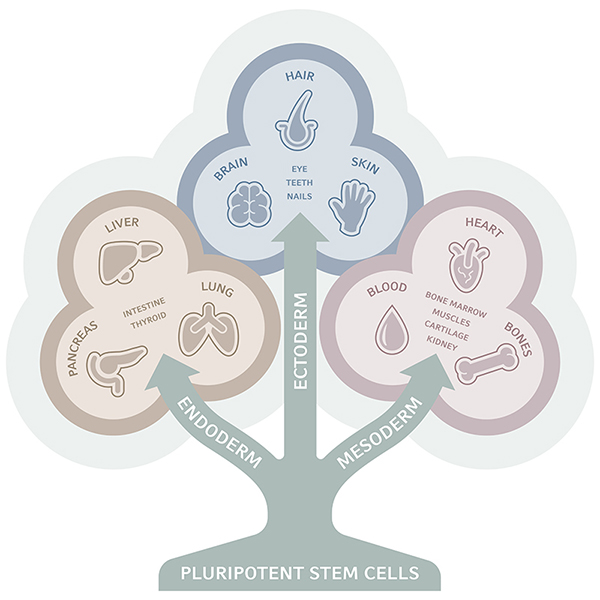 Why are stem cells important?

Stem cells are the precursors to all cells in our bodies. In recent decades, stem cells have revolutionized our understanding of tissue and organ development – and are now making their way into the clinic, aiding treatments for a range of degenerative conditions.

Researchers use stem cells for their rapid, sustained proliferation and their ability to differentiate into functional mature cell types. This combination of expansion followed by specialization reflects the natural development of tissues and organs. It means that stem cells can provide a suitable model for studying both natural tissue development and disease.

Aside from their use in research, stem cells also have the potential for use in the clinic, offering treatment by replacing or supporting damaged tissues. Transplanting adult hematopoietic stem cells is already common practice in many countries around the world and is highly successful in, for example, cancer treatment. Trials of other types of stem cells are underway for conditions such as Crohn's disease, age-related macular degeneration and heart disease. 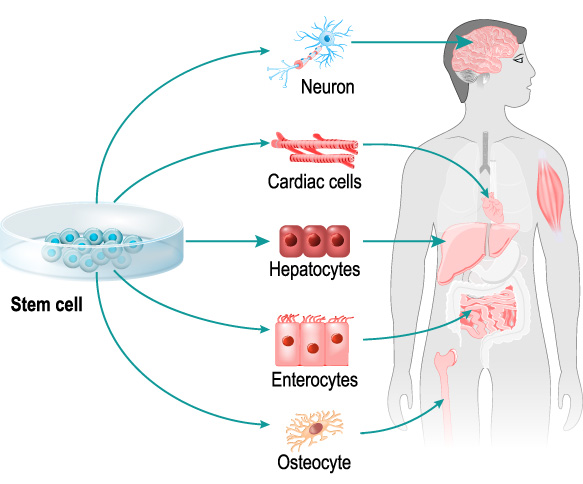 Where do stem cells come from?

ESCs are present in the cores of early-stage embryos – typically in the first week after fertilization before implantation of the embryo has taken place. In more mature embryos, ECSs differentiate, first into three germ layers and then into more specialized cells. ESCs can be cultured in vitro where, under the right conditions, they can proliferate indefinitely without losing their pluripotency1. These conditions include specialized culture media, incubators with highly reliable temperature and gas control (for example hypoxic culture), and growth surfaces that prevent differentiation.

Nevertheless, in recent years over a thousand scientific papers about human ESCs have been published annually2, and more than a dozen clinical trials using ESC-derived cells are currently underway with encouraging early results3. The last decade has also witnessed the rise of iPSCs. These cells are a successful alternative to ESCs, which are created by 'reprogramming' of mature cells and therefore avoid many of the ethical issues surrounding the use of live embryos.

The first iPSCs were developed in 2006 by Japanese researchers Shinya Yamanaka and Kazutoshi Takahashi, who used retroviral transduction to introduce four genes (Oct3/4, Sox2, Klf4 and c-Myc) into mouse fibroblasts4. The same group later showed significant hypoxic improvements in reprogramming efficiency when using conditions5. Further modifications to the method by other researchers led to reprogramming of neural cells to iPSCs using only a single gene (Oct4)6.

Although viral transduction is a relatively efficient method for generating iPSCs, other groups have studied alternative reprogramming strategies that could improve reliability by reducing genetic abnormalities and the risk of tumor formation. These strategies have focused on avoiding the use of viruses, avoiding the need for integrating DNA into the cells’ genome, or both. Examples of viral and non-viral methods include episomal vectors, adenoviral vectors, Sendai viral vectors, plasmids, synthetic mRNA, miRNA, protein transduction and small molecules7,8.

Avoiding the ethical issues surrounding ESC isolation has been a key factor in the success of iPSCs. In addition to this, iPSCs also have potential for use in autologous, patient-specific treatments. Because iPSCs originate from adult cells, it is possible to generate iPSCs from a patient’s own cells, opening possibilities for treatment not possible with non-autologous cells.

However, both ESCs and iPSCs carry important safety concerns in clinical trials. Because both cell types are pluripotent, they can form tumors when accidentally implanted in an undifferentiated state. This risk means that treatments using cells derived from ESCs or iPSCs need strict quality control to eliminate the risk of tumor formation.

In the years after their discovery, iPSCs have become one of the standard tools available to stem cell researchers, providing a valuable alternative to ESCs for in vitro studies and in therapeutic use9.

MSCs are a type of adult stem cell that remain in the body during adulthood and continuously renew and differentiate into specialized cells. MSCs are found in various adult tissues, the main source being bone marrow, but they are also found in adipose tissue, amniotic fluid, umbilical cord blood and the placenta10.

Unlike ESCs (which are pluripotent), MSCs are multipotent, meaning they can only differentiate into a small number of cell types – most notably bone, cartilage, muscle and fat cells. Another key difference is that MSCs cultured in vitro do not divide indefinitely, but instead show a decreasing rate of proliferation over time. For these reasons, some scientists prefer to use the term "multipotent (mesenchymal) stromal cell"11.

In the human body, MSCs fulfil a variety of roles, for example bone repair after a fracture. When a fracture occurs, MSCs migrate from the bone marrow to the fracture site and differentiate into bone-forming cells that repair the damage12.

In research, MSCs are studied for treatment of various conditions, including orthopedic injuries, graft-versus-host disease following bone marrow transplantation, cardiovascular, autoimmune and liver diseases. Because MSCs occur naturally in adults, the risk of tumor formation after implantation is low12.

What are stem cells used for?

Stem cells have also captured the public´s imagination and generated media coverage across the world, for example when scientists created the first beating heart cells in a petri dish13. So far, two Nobel prizes in medicine have been awarded for key discoveries in stem cell research. In 2007, Sir Martin Evans, who cultured mouse ESCs in vitro for the first time, received the Nobel prize; in 2012, Shinya Yamanaka received the prize for the discovery of iPSCs.

Despite early setbacks, there has been an increase in clinical trials in recent years with a fast-increasing rate of approvals of iPSC trials, for treatment of high-profile conditions, such as Parkinson’s disease14, age-related macular degeneration15 and heart disease16. If these ongoing trials can demonstrate both safety and efficacy, the number of approvals is expected to rise significantly in the future.

One important aspect in assessing the safety of stem cell treatments is the range of cells and compounds with which the stem cells come in contact during in vitro culture. Stem cell growth surfaces show a large amount of variation – from animal-derived 'feeder cells' to synthetic, chemically defined surfaces – which can have an impact on cell behavior as well as clinical safety.

Efficient and reliable stem cell culture also means having to deal with the challenges of stem cells. Expanding stem cell cultures in vitro requires tightly defined conditions to make sure they retain their stem cell-like state. Changes to the phenotype of stem cells can sometimes be detected by their visual appearance; however, there are also more sophisticated techniques that can be used to confirm stem cell identity.

The composition of the culture medium is a key parameter for maintaining a stem cell-like state. However, the surface that the cells grow on and the atmospheric composition also play critical roles. Compared to mature cells, stem cells are more sensitive to each of these factors, forming an important cause for lack of reproducibility as partially differentiated cells behave differently to true stem cells.

Many types of stem cells do not retain their phenotype when grown on conventional tissue culture plastic; specialized growth surfaces (such as feeder cells, extracellular matrix coatings or specialized synthetic growth surfaces) may be required. These surfaces help to maintain the stem cell phenotype through their shape, texture or chemical properties.

The behavior of stem cells, like many other cell types, depends on the cells around them. Especially in clinical applications and studies involving large in vitro constructs, it is not possible to produce suitable constructs using small-scale 2D culture. In these cases, researchers can turn to 3D organoid culture to study complex behaviors and create constructs not achievable with 2D culture. This requires significant upscaling.

Bioreactor culture is a common method for producing the cell numbers required for these types of large-scale applications. Culture systems, such as microcarriers suspended in a spinner flask, provide a high surface area for cell growth combined with enough access to oxygen and nutrients. This approach can ensure consistency in scaling up stem cell culture.

14. Cyranoski D. 'Reprogrammed' stem cells to be tested in people with Parkinson's. Nature 2018.