In stem cell research, in vitro culture is essential for obtaining large numbers of cells. The condition of the surface on which the cells grow plays a key role in helping cells to proliferate and – more importantly – retain their stem cell-like phenotype.

In an organism, most mature cell types spend nearly all their time anchored to the extracellular matrix of the tissue they reside in. When grown in vitro, these cells also require a tissue-culture treated surface to adhere to, such as glass or plastic, in order to survive and proliferate.

In stem cell culture, the stability of the cells phenotype is a key aspect for successful, reproducible results. Conventional growth surfaces, such as tissue culture-treated polystyrene, are often not suitable for stem cell culture as they can cause random differentiation into other cell types or even cell death, due to the absence of factors that are essential for stem cell survival and proliferation1.

Therefore, several different methods of modifying surfaces prior to stem cell seeding have been developed in order to maintain phenotypic stability. These methods can be subdivided into three categories: feeder cells, biological coatings and synthetic coatings.

When Thomson et al.2 cultured the first human embryonic stem cells in vitro, they seeded their cells onto a layer of feeder cells. Different types of terminally differentiated cells can serve as a feeder layer for stem cells, with many researchers using fibroblasts. Before seeding, feeder cells have to be irradiated with gamma rays or treated with other reagents (e.g. Mitomycin-C) to prevent them from proliferating.

A feeder layer supports stem cells by producing both soluble and insoluble factors. Extracellular matrix proteins provide anchorage points and the complex mix of secreted soluble compounds plays a role in maintaining a stem cell phenotype. However, the question of which combination of soluble factors is responsible for phenotypic stability remains to be answered. 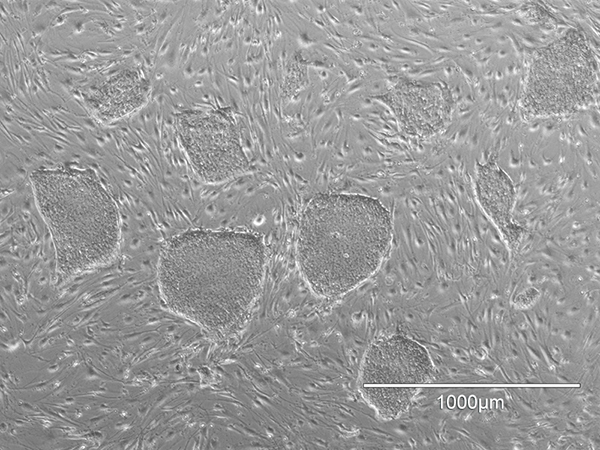 Although feeder cells have been used successfully in stem cell culture for many years, this method does rely on the presence of living cells throughout the period of culture, posing challenges for reproducibility as well as for regulatory approval in clinical applications. The use of feeder cells is also more labor intensive than alternative methods; researchers need to seed the feeder layer on the day before stem cell culture and also treat it to inhibit proliferation.

An alternative to the use of living cells for supporting stem cell growth is to harvest proteins and other compounds secreted by feeder cells, and to use this mixture as a coating on the surface of the cultureware. These coatings are commercially available under trade names such as Matrigel®, which is liquid at low temperatures and quickly forms a gel at 37 °C.

Biological coatings consist, for a large part, of proteins that make up the basement membrane (mainly collagen and laminin). They also contain a range of growth factors, the exact composition of which varies between different suppliers and batches.

When using biological coatings, it is easier to achieve good consistency between cultures by working with a single batch of material as it avoids the influence of batch-to-batch variability. However, the absence of living cells makes the stem cell environment more different from in vivo conditions compared to using feeder cells. Furthermore, both biological coatings and feeder cells cannot provide chemically defined culture conditions as they rely on compounds secreted by other human or animal cells3.

Biological coatings also present challenges in storage and handling. Many coating products have a limited shelf life, even at low temperature, and require slow, controlled thawing to prevent premature gelling. During the coating process, chilled pipette tips are recommended for the same reason and once the coating is applied, plates need to be used on the same day – all of which makes the coating process longer and more difficult.

Responding to the need for culture conditions that are either xeno-free (exposed to human-derived products only) or animal-free (not exposed to any human- or animal derived products), synthetic surfaces are a more recent addition to the array of stem cell culture surfaces. These coatings generally have a far longer shelf life than biological coatings, which makes purchasing and storage easier. Synthetic coatings can also be chemically defined for greater batch-to-batch homogeneity and improved culture consistency.

In the natural stem cell environment cells attach to extracellular matrix (ECM) proteins, such as fibronectin, vitronectin and laminin. One way to promote the adhesion and proliferation of stem cells synthetically is by coating the culture surface with short, synthetic fragments (or motifs) of these ECM proteins.

A commonly used motif for cell attachment is RGD – a peptide consisting of three amino acids, which is present in several common ECM proteins. However, there are also more advanced coatings that closely mimic the natural ECM, e.g. with a combination of fibronectin-derived motifs. Not only do these coatings provide suitable anchorage for stem cells, they have also been shown  to help pluripotent stem cells retain their phenotype through many successive passages, as demonstrated by sustained expression of the pluripotency markers SOX2, TRA-1-60, SSEA4 and OCT4. 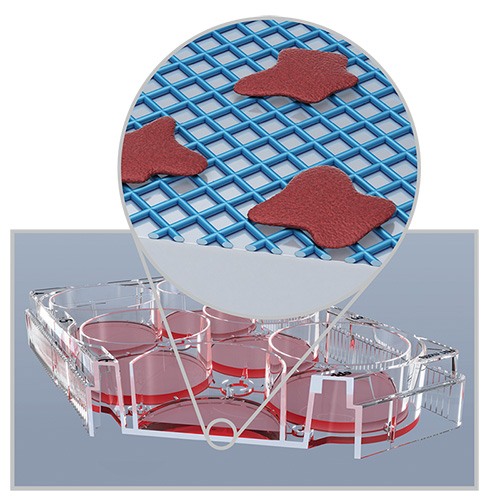 A schematic illustration of stem cells cultured on a synthetic growth surface.

Of the three methods described, coating with protein motifs is the least representative of the natural stem cell environment. However, it provides a high level of consistency and is a chemically-defined, animal-free method for the long-term culture of stem cells.

Over the years scientists have developed different methods to achieve sustained, reliable growth of stem cells. These methods range from the use of live cells, closely mimicking natural conditions, to synthetic, chemically defined coatings.

All methods have shown not only to support stem cell attachment and proliferation, but also to help cells in keeping their stem cell phenotype over long periods of culture. The question of how to create optimal conditions for stem cells is an area of ongoing debate. However, a large part of the decision to use a method will also depend on the application and aims of the culture – as well as on practical considerations.

Matrigel® is a registered trademark of Corning Inc., USA.