Whereas no mandatory testing schedule exists at this time, it is recommended to systematically check and document cell line identity at least:
- When a foreign cell line enters the cell culture laboratory.
- During establishment of frozen cell stocks.
- At the beginning and at the end of an experimental project.
- Before distributing a cell line.

Several different methods are available to detect inter-species and intra-species cross-contamination in cell cultures. These methods verify cell line identity on the protein or genetic level. The acquisition and application of authentication methods is not difficult for trained scientists. However, reliable interpretation of the results requires advanced experience. Depending on the testing method, special laboratory equipment might also be necessary. For support, commercial services may be employed to perform testing and/or interpretation of analysis within a short turnaround time.

The analysis of Short Tandem Repeats (STR) has become the standard for intra-species identity testing of human cell lines. However, development of markers for authentication of non-human cell lines is still an ongoing process, and more reliable polymeric STR markers which can provide intra-species discrimination have to be identified. To date, a few STR markers have been identified for mouse and African green monkey cell lines [1;2], while others are under development for Chinese hamster and rat cell lines. These are already employed by a small number of companies which also provide STR profiling services for non-human cell lines.

Chromosomes provide information about species, gender and chromosomal integrity and are characterized by their species-specific number and structure. Since these parameters can differ strongly between different species, the illustration of chromosomes in the form of a karyogram can provide information about the origin of cells and can often be related back to a specific species. The most prevalent cell lines used in cell cultures derived from human, primate, rat, mouse or hamster can be distinguished by their chromosome number. Thus, karyotyping is essentially used for detection of inter-species cross-contamination. If a detailed karyotype analysis of the original material is available, cytogenetic analysis may be used for the analysis of individual cell lines in order to determine whether intra-species cross-contamination has occurred. 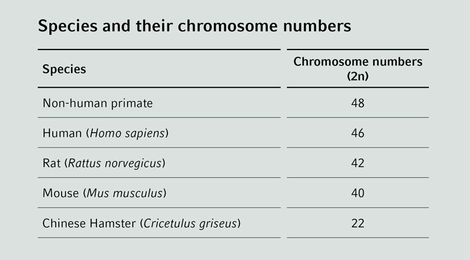 For the purpose of a karyogram, mitotic cells are arrested in the metaphase of the cell cycle when chromosomes assume their most condensed confirmation. Subsequent staining and microscopic analysis will reveal characteristic features. In order to obtain representative data, this technique must be established for each individual cell line. In addition to its labor-intensive and time-consuming aspects, karyotyping requires extensive laboratory experience within the cytogenetic field in order to ensure reliable interpretation. This is especially true in cases of intra-species cross-contamination. In particular the use of transformed cells with incidences of aneuploidy/heteroploidy (loss or gain of chromosomes), might hinder species identification without using specific markers in advanced analyses.

Isoenzymes (or isozymes) are proteins which catalyze the same chemical reaction but differ in their molecular structure and between species. These enzymes can be separated using chromatography or electrophoresis, resulting in a species-specific zymogram. A comparison of the mobility of isoenzymes from cell lines derived from different species can be used to detect inter-species cross-contamination if the contaminating cells represent at least 10% of the total cell population.
In most cases, the analysis of four different isoenzymes (nucleoside phosphorylase, glucose-6-phosphate dehydrogenase, malate dehydrogenase, lactate dehydrogenase) is sufficient to confirm the identity of the sample of interest [1]. Only the differentiation of mouse and hamster cell lines requires the additional analysis of peptidase B. In general, isoenzyme profiling is suggested as a rapid and easily conducted technique to check for inter-species cross-contamination. It can be performed with a commercially available kit designed to confirm authentication by determination of the mobility of seven isozymes for six cell lines in less than three hours [2].

DNA barcoding is based on the amplification of a 648 bp region of Cytochrome C oxidase subunit I (CO1) within the mitochondrial genome. Since this short nucleotide sequence is highly conserved within a species, but varies between different species, this method is suitable for species-identification with a detection sensitivity comparable to isoenzyme analysis. DNA barcoding therefore represents an alternative to isoenzyme analysis. DNA barcoding comprises four main experimental steps: DNA extraction, amplification of the CO1 fragment using a primer mixture capable of annealing to the CO1 gene in all species, followed by DNA sequencing and sequence analysis. The freely available informatics database Barcode of Life Data System (BOLD ) holds a collection of already known DNA barcode records of various species for final alignment of sequences. Thus, DNA barcoding represents a rapid and easy method to detect inter-species cross-contamination by using standard molecular biology techniques.