What is Primary Cell Culture?

In this article in a series of cell culture articles, we look at the basics and significance of primary cell culture.

This article appeared first in “Inside Cell Culture”, the monthly newsletter for cell culture professionals

Introduction - What is primary cell culture?

Primary cell culture refers to the culturing of cells directly obtained from a multicellular organism. Briefly, the first step in primary culture is to obtain tissues from a human or animal; these are usually tissue masses that need to be disaggregated using chemical, mechanical or enzymatic methods to break-up tissues and obtain viable cells. These viable, disaggregated cells are then induced to grow in culture vessels with complex, bespoke media.

Based on cell characteristics, types of primary cell culture can be further sub-divided based on their capacity to differentiate, their ability to adhere to surfaces or their morphological structure (Figure 1). 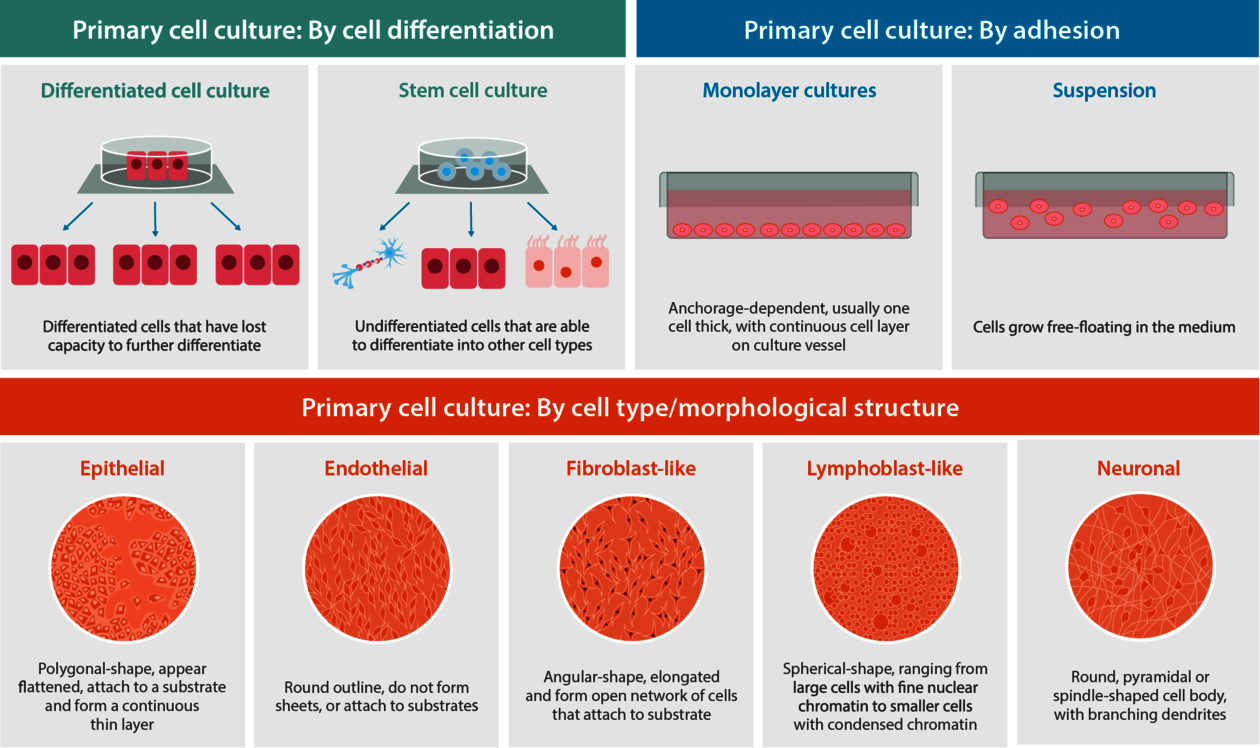 Figure 1. Sub-classification of primary cultures based on (A) cell differentiation status (B) adhesion capacity and (C) cell type/morphological structure.

Across all types of primary cell culture, cells are grown and proliferated in a favorable growth medium until they reach confluence – a term used to describe the state where the cells occupy the complete growth area of the culture vessel. Before the cells reach confluence, they will need to be sub-cultured as nutrient exhaustion, toxic metabolite accumulation, and the available space for growth all limit proliferation. In the case of adherent cells, contact inhibition is an additional factor whereby cells stop proliferating when they reach confluency and occupy the surface of a culture vessel. It can be more difficult to determine confluency with suspended cell cultures, however the cells tend to form clumps in the medium.

The first-time cells are sub-cultured from a primary culture, they are defined as a cell line. Further passaging of the cell line, whereby cell cultures are successively transferred across growth medium is defined as the process of secondary culture.

Cells in primary cell culture have a limited lifespan as they can only divide a set number of times (known as the Hayflick limit after the anatomist, Leonard Hayflick, who developed the concept). Before they reach confluence, they need to be sub-cultured into fresh growth media or on to new growth substrate to promote further growth and proliferation. This process is known as secondary cell culture (Figure 2). Primary and secondary cell cultures are underscored by a similar process but are differentiated by factors such as lifespan, biological relevance, and cell origin (Table 1).

As the culturing process continues, the cells with the highest growth capacity predominate and accordingly, the degree of genotypic and phenotypic uniformity rises. As a result of genetic transformation, cells can become what’s known as an immortalized secondary cell line (Figure 2). Immortalized cell lines – produced by viral or chemical addition - are widely used in research as their immortality (i.e. ability to divide indefinitely) allows researchers to perform experiments multiple times on genetically identical cells. Similarly, cancerous cells can also be used to create continuous cancer cell lines, that have rapid generation times and the potential to be passaged indefinitely. Conversely, when cells are not transformed, they undergo a limited number of population doublings and are therefore known as finite cell lines. 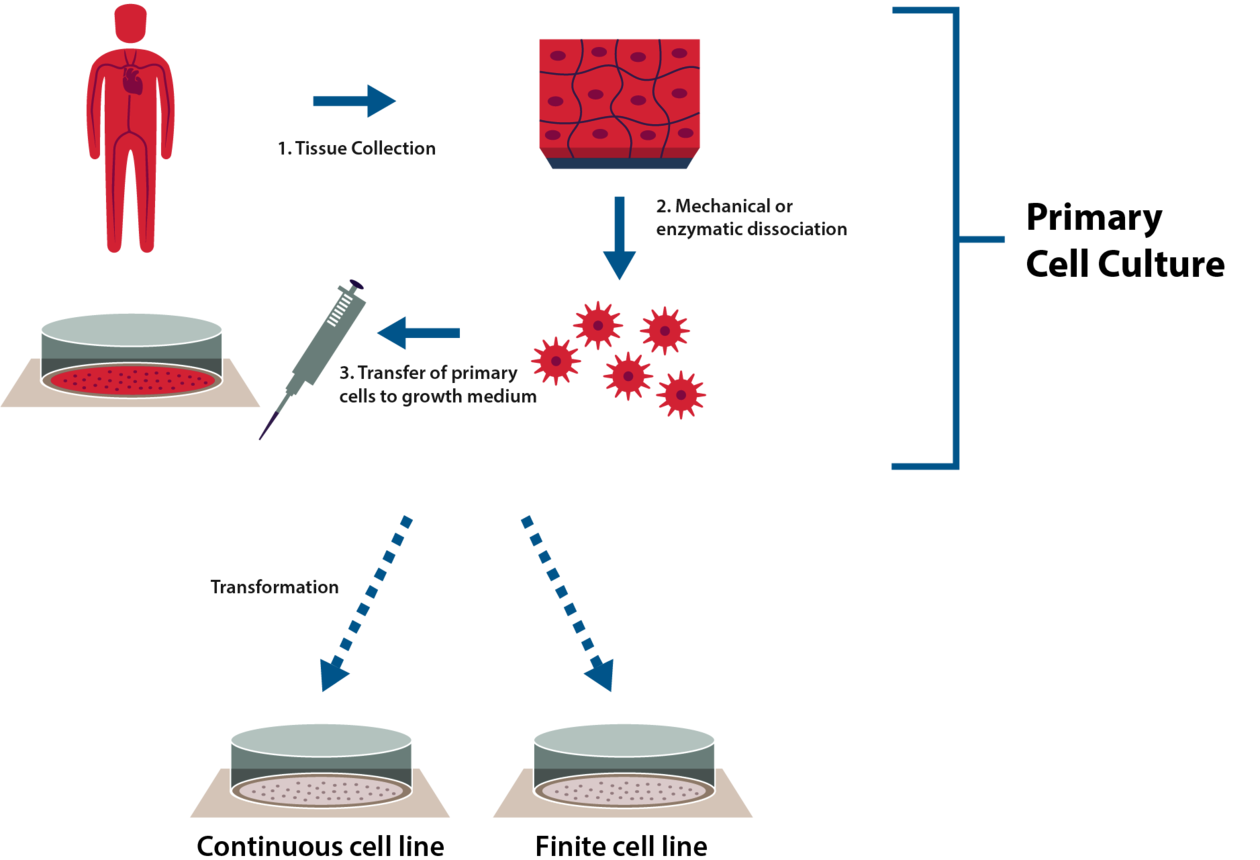 Figure 2. Workflow steps involved in primary and secondary culture. (1) Tissues are obtained from a human or animal by methods such as biopsy. (2) Since primary cultures
are usually prepared from tissue masses, they are disaggregated by either mechanical,
chemical, or enzymatic means to yield viable cells. (3) Disaggregated cells are induced to
grow in culture vessels with complex and tailored media. (4) Before primary cultures reach confluence, primary cells are sub-cultured onto fresh media. This process may be repeated many times to continually supply nutrients and substrate needed for continued expansion. (5) Secondary cultures may be treated with chemicals or viruses that cause genetic transformation and ultimately result in an immortalized cell line. This can also happen spontaneously in the case of immortal cancer cell lines for example. (6) If cells are not transformed, they can be continuously passaged for a limited number of population doublings, and are known as finite cell lines.

There are advantages and limitations to working with both primary and secondary cultures, and the choice is dependent on the goal of the experiment. Often, primary cell cultures are preferred over cell lines since they are more representative of their tissue of origin. In turn, primary cultures represent the best experimental platform for in vivo studies, sharing the same karyotype as their corresponding parent tissue, and expressing characteristics that are not seen in cultured cells. However, the major limitation of primary cell culture is the finite lifespan. In addition, considering the implications and method for obtaining a relevant biopsy or animal model is key (Table 1).

On the other hand, secondary cell cultures are long-lasting, even potentially infinite, due to supplementation of fresh nutrients and substrate at regular intervals (Table 1). However, cell lines mutate. Through the continued passaging of cells, genotypic and phenotypic changes may mean that secondary cell cultures end up completely unrecognizable from their parent tissue (Table 1). Indeed, the International Cell Line Authentication Committee (ICLAC) maintains a register of misidentified cell lines, which currently contains 531 misidentified cell lines (as of October 2021). In one particularly striking example, a particular cell line (MDA-435) - used in thousands of publications - was mis-identified as a breast cancer cell line when it was, in fact, a melanoma cell line1.

Historically, primary cells were considered particularly difficult to work with. However, advances in primary cell culture, the availability of commercial primary cells with fully optimized protocols, and new analysis techniques that require less input are making the process easier than ever before.

One of the major advances in cell culture is the transition from 2D to 3D. In a simplified 2D-culture, the tissue-specific architecture, cell-cell interactions, and mechanical/biochemical signalling can be diminished. In turn, the biological relevance of these cultures is limited.

Conversely, 3D cell culture allows cells to grow and interact with a surrounding extracellular framework in all three dimensions. As a result, 3D cultures more closely mimic their original physiological state – allowing cells to interact with each other and the extracellular matrix. This approach has been ground-breaking in areas such as drug discovery and development due to its reliability in predicting in vivo responses. This has culminated in cutting-edge technologies - such as patient-derived organoids and organ-on-a-chip - offering highly contextual models for drug screening and development.

Another limiting factor in primary culture is the generation of enough primary cells for analysis. Generally, this can only be overcome by starting with a greater volume of tissue which may be difficult to attain. However, advances in the sensitivity of analytical tools are offering a solution. For instance, single cell technology – including sequencing, westernblots, and mass cytometry – require very small amounts of starting material, reducing the need to culture large quantities of primary cells.

The future of primary cell culture

Overall, advances in technology are overcoming some of the inherent challenges of primary cell culture. In turn, it is quickly becoming the approach of choice for cellular and molecular biology research and application. Continued primary cell culture developments are set to revolutionize many fields; from vaccine production and organ replacement to stem cell therapies and cancer research.